Over 40 700 visitors, above 1000 exhibitors, and over 500 speakers were hosted by Koelnmesse during 13-14 September in Cologne under the call for ‘Lightening the Age of Transformation’. The Aimprosoft team has been back jam-packed with impressions of the commercial potential of the digital economy.

Dmexco originally had its start as a small conference about online marketing and sales channels growing to a platform for international business to happen. The nine round of dmexco was finished several days ago but buzzing about the diversity of ‘digiconomy’ continues unabated. Bob Lord, Chief Digital Officer at IBM, took the stage to inspire about a transformative power of AI for building close-knit relations between brands and customers. 17 conference stages were filled with debates and round-table discussions on the digital economy and content value for the future. On a similar note, AI was considered to be a ubiquitous affair in marketing capable of coming up with the huge amounts of collected data. Image 2. Capture of a VR eventful journey from Lufthansa #FlyingLab

Our team consisting of CEO, CTO, Head of International Relations and Business Development Managers paid a friendly visit SAP Hybris representatives. Having been a key technology in Aimprosoft’s portfolio almost three years, Hybris continues to be a steadfast choice of large retailers tackled to build the omnichannel environment. 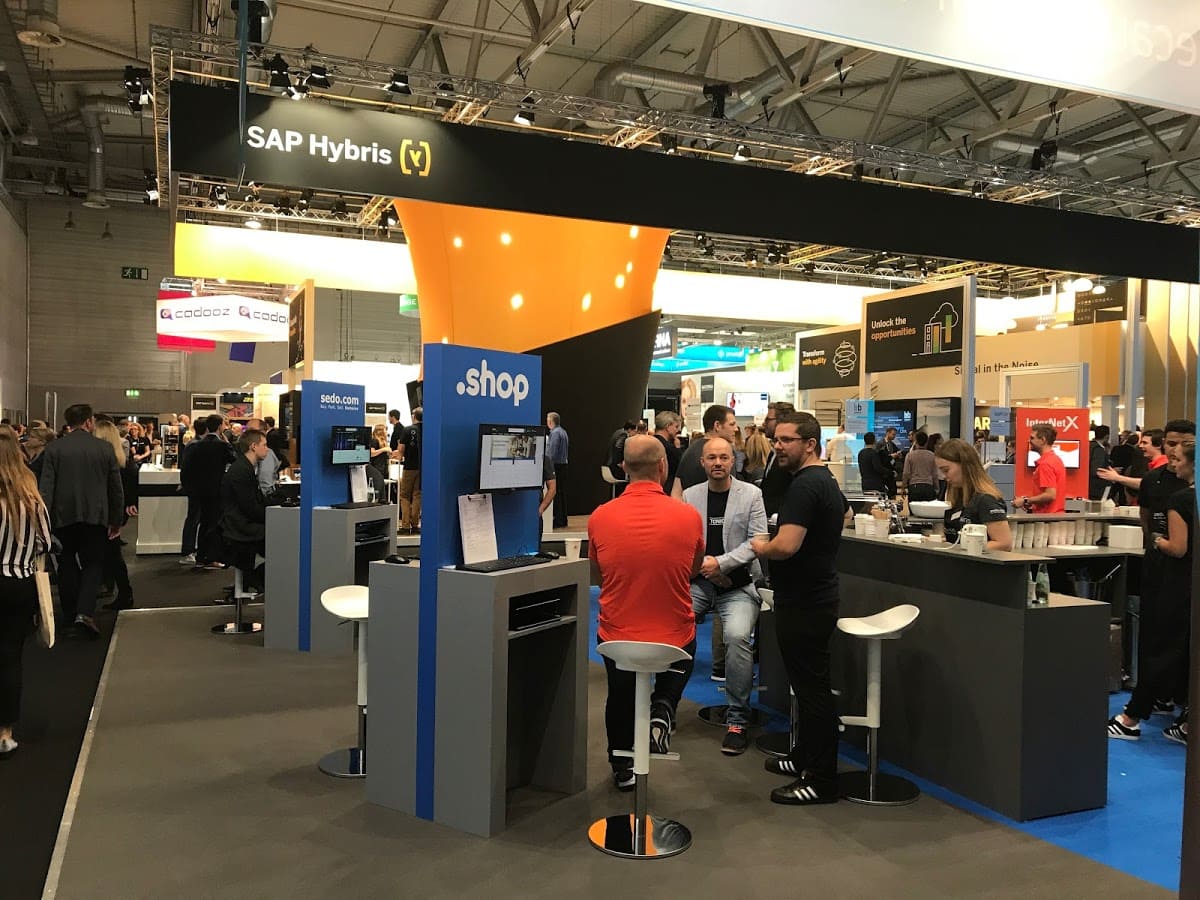 Strolling across the multiple exhibit spots of dmexco, we noticed space had a harmonious combination of dreamers and doers. Adobe, IBM, Salesforce, Google, Adform, eBay, Lufthansa is a partial list of world-drivers.

Tim Kendall, Pinterest, spoke about a visual discovery technology as a starting point for business to be considered by customers. Dark-nailed David Shing, Digital Prophet from OATH, well-known to us from DES stated that ‘we are value and service-based today’ highlighting the concernment of these two patterns for business. And for sure we were taken with Sheryl Sandberg’s speech, Facebook, about the importance of technologies for the human consciousness of the future that comes.

Business and marketing are inseparable. Choosing the next point to start a new partnership we don’t limit ourselves to locations, domains, or technologies. Aiming to be effective we follow trends to bring the best value for businesses. At dmexco, we had fruitful dialogues with marketing-focused companies and found common ground. Enterprises both EU and worldwide are keenly interested in creating technology-based favorable environments for doing business, and automation of workflow, having a continuous touch to their customers.

Cologne is a welcoming city, and the Germans were remembered as good-natured people. There was heard a shift forwards digital economy mindset for the Ukraine and EU from the stage of dmexco.

“The world has to lean it to transformation. That’s what changing our mindset is all about.” Nigel Morris placed focuses on the importance of positive mindsets.

Maxim Ivanov, CEO of Aimprosoft, vented encouragingly: ‘This time we discovered a few fields to apply our experience in software development for enterprises. New domains including marketing, media, and public relations areas where the need for acceleration of business processes is clearly visible open to us new ways to move.’

Igor Zaporozhets, CTO of Aimprosoft shared his take on the look beyond the technology: ‘The engines of the digital revolution have been already launched. But only people are the real nature power to perform a motion. People are initial. Technology is secondary. We at Aimprosoft rely on our mind firstly to be effective doing our work.’

Aimprosoft is a Ukrainian software development company headquartered in Kharkiv, Ukraine. A history of the company goes back to 2005 a year when it was established. A customer-centric approach has grown us into a solid team of professionals which provides dedicated resources of the highest qualification.

Maxim worked his way up from a developer to a founder, overcoming career stages step by step with profound knowledge and skills. His experience and natural-born business acumen have made it possible to successfully meet the ever-increasing market demands and attract the best specialists to the Aimprosoft family for a decade and a half. Maxim is constantly looking for new promising areas that can be used to digitize business and make a difference in modern reality.

Statement to Customers on COVID-19 Situation

Aimprosoft Named a Leader of Custom Software Development by Clutch